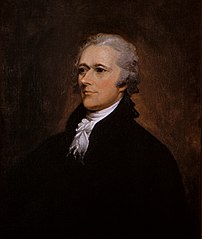 Wikipedia tells us that Hamilton was “[a] Founding Father of the United States, chief of staff to General Washington, one of the most influential interpreters and promoters of the Constitution, the founder of the nation’s financial system, and the founder of the first American political party.”

The Bill of Rights Institute, in its page on Hamilton, hints at why some consider Hamilton a controversial figure: “Alexander Hamilton is perhaps the most misunderstood and under-appreciated of the Founders. A proponent of a strong national government with an “energetic executive,” he is sometimes described as the godfather of modern big government. However, Hamilton was no less a champion of human liberty than his more famous political rival and American icon, Thomas Jefferson.”

Thomas J. DiLorenzo is quite critical of Hamilton in his article The Founding Father of Crony Capitalism:

Hamilton was the intellectual leader of the group of men at the time of the founding who wanted to import the system of British mercantilism and imperialistic government to America. As long as they were on the paying side of British mercantilism and imperialism, they opposed it and even fought a revolution against it. But being on the collecting side was altogether different. It’s good to be the king, as Mel Brooks might say.

It was Hamilton who coined the phrase “The American System” to describe his economic policy of corporate welfare, protectionist tariffs, central banking, and a large public debt, even though his political descendants, the Whig Party of Henry Clay, popularized the slogan. He was not well schooled in the economics of his day, as is argued by such writers as John Steele Gordon. Unlike Jefferson, who had read, understood, and supported the free-market economic ideas of Adam Smith, David Ricardo, John Baptiste Say (whom Jefferson invited to join the faculty of the University of Virginia), Richard Cantillon, and Turgot (a bust of whom still sits in the entrance to Monticello), Hamilton either ignored or was completely unaware of these ideas. Instead, he repeated the mercantilist myths and superstitions that had been concocted by apologists for the British mercantilist state, such as Sir James Steuart.

The public is welcome and encouraged to attend Wichita Pachyderm Club meetings. Meetings are held almost every Friday in the Wichita Petroleum Club on the top floor of the Bank of America Building at 100 N. Broadway. The program starts at noon, and it is suggested that guests arrive by 11:45 am in order to get their lunch before the program starts. The meeting costs $12, which includes a delicious buffet lunch and beverage. For more information click on Wichita Pachyderm Club.

New from Voice for Liberty